Great for indoors and outdoors, this sturdy and stylish cup is perfect for coffee, tea, or even your morning cereal.

I had ordered two as a Christmas gift, but was actually quite disappointed in these when I received them. The first ones that arrived were not at all the customizations I had chosen with regards to background and quote selected. I contacted gearlit and they were quick to respond, however the photos I provided them were not sufficient for their manufacturer who required clearer pictures (even though the second set of photos were just as clear and same quality??). Once the second photos were acceptable, they did however have new ones shipped to me at no cost and without requiring the originals to be sent back, so I'll give them credit for that. Sadly, the mugs were nowhere near the size I expected them to be at all though based on the advertised photo, and I was actually embarrassed at the size of them for the money o spent on them with exchange and shipping all-in. Not to mention the stickers on the bottoms of the mugs are damn near impossible to remove and a safe adhesive remover I used appears to have removed some of the clear coat lacquer on the bottom of the mug as well. Overall the customization is fun and nice, but it was not worth the price paid for the quality of item I received. 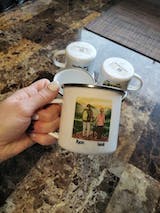 This was a gift for my husband and he loved it so much it is now his new backpacking cup. 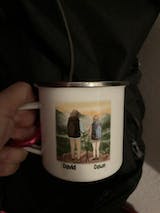 The image was so spot-on, I felt as if it had been taken from an actual photograph. The options for hair, clothing, etc. made it possible to customize the mug to a tee! 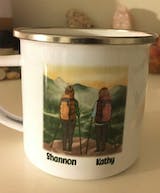 We have not used them as of yet, will be taking them on our next overnight hike. Love the mugs!!!

This mug was the perfect gift to my husband for our anniversary. I have received so many compliments on it and it turned out just as pictured when I ordered.

Added to your cart: